LG patented yet another foldable phone, this time one that stands out of the crowd, because it’s transparent. The patent mentions ways you can operate the device by doing touch input using its rear side. LG has been experimenting with quite a few foldable device formats.

Usually we see them revolving around foldables that are clamshells and bend in a vertical manner, but this time it’s different. The company already unveiled a 77 inch flexible and transparent 4K OLED display at SID 2018. The idea of a double sided transparent smartphone is still pretty fresh. The new patent refers to a “Mobile Terminal” and it was filed 3 years ago, but approved this week. 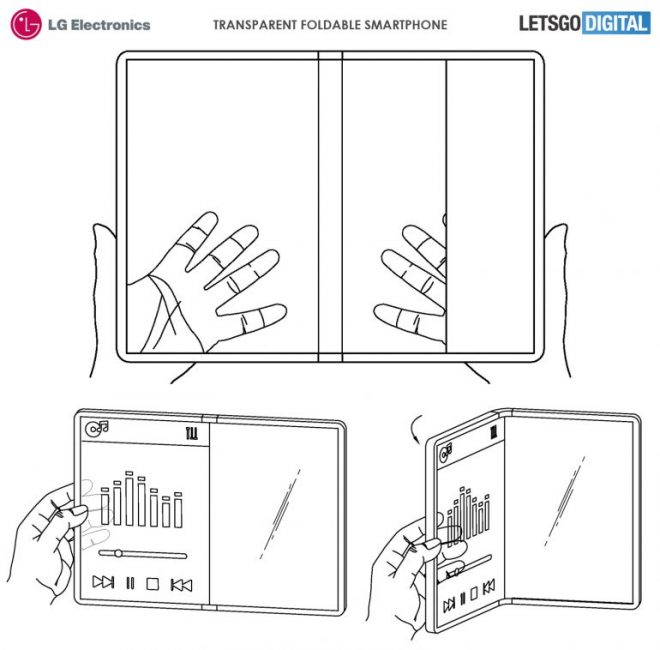 The documents show a smartphone that’s basically all display and it’s able to bend. There’s a display area at the front and back of the phone. Bezels are narrow and everything is see though. Apparently, transparency can also change. If the transparency of the screen info is higher than 20%, the rear touch sensor is activated.

Once you fold the device open, the flexible screen is made of two parts, the left and right one. Each can independently show transparent or opaque content, with the degree of transparency depending on the angle at which you hold the machine. Once you do a fold, the transparency increases. This sure sounds like something extra compared to what Samsung and Huawei have been doing.

There are a lot of moving parts to get through and I imagine such a device would be very slim and have a “stub” with all the main components on the side.